SB1415– Transfers the Mining & Mineral Museum to the University of Arizona permanently.
Earlier this week, AZGS Director Phil Pearthree and Michael Conway (Chief, Geologic Extension Service, AZGS) met with Univ. of Arizona lobbyists and Sen. Gail Griffin and her chief aide to discuss SB1415, which transfers the Polly Rosenbaum Building and assets of the former Arizona Mining and Mineral Museum to the University of Arizona.
The chief purpose of SB1415 is to, ‘Transfers the Mining, Mineral and Natural Resources Educational Museum (Museum) to the University of Arizona (U of A) permanently. The original 2016 bill placed the museum with the AZGS and returned the museum to the Arizona Historical Society by July 2018, in the event AZGS had not opened the museum. The new bill specifies the University of Arizona as the primary institute for operating, maintaining, and managing the building and its assets. UA administrators assure us there is still a large role for AZGS to play in developing content and channeling museum design. We anticipated this change in language, we embrace it, and we are ready to go forward with UA committed to the task.
SB1415 comes before the Arizona Senate Appropriations Committee between 2-4 p.m. on Tuesday, 14 February.

SB1184 – Arizona Geological Survey appropriation. Sen. Griffin also introduced SB1184 to reinstate AZGS’ state allocation of $941,000 for FY 2018. You may recall, that the AZGS budget was zeroed out in FY 2017, and AZGS was transferred from state government to the College of Science at the University of Arizona.
SB1184 will also come before the Appropriations Committee on Tuesday afternoon, 14 February. 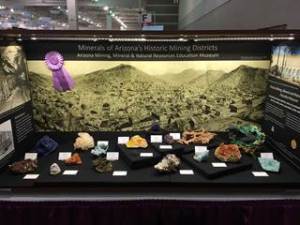 On 9 February, AZGS unveiled our TGMS exhibit, ‘Minerals of Arizona’s Historic Mining Districts’. TGMS provided us with prime real estate, placing us just inside the entryway.  The exhibit received a great reception and MMNRE curator Catie Carter was there to answer questions about the display and the museum. Thanks to our friends from the Flagg Mineral Foundation, Phil and Bill, in assisting us in dressing out the exhibit case. Thanks, too, to TGMS for providing space and a $300 grant for materials!

June 2015
On Tuesday, June 16th, 2015 an FMF member and former Monday crew members serviced the equipment outside the former Arizona Mining and Mineral Museum to make sure it remains operational. 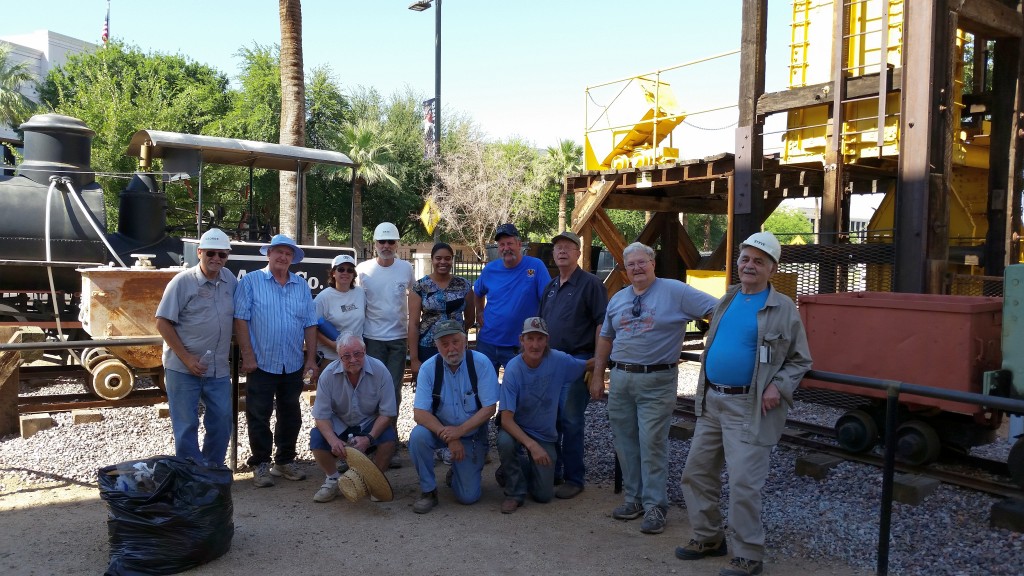 March 2015
The former Arizona Mining and Mineral Museum near the state Capitol could be open again if a bill moving through the Legislature passes.
Bills to reopen the museum have been proposed annually since it closed in 2011, but this year’s SB1200 passed the Senate and is awaiting a full vote of the House. It passed the House Appropriations Committee on a 10-1 vote March 25.

The Senate Rural Affairs and Environment committee passed SB1200 today. If the bill becomes law, it will restore the mineral museum by transferring all museum assets from the Arizona Historical Society to the Arizona Geological Survey. Senator Sylvia Allen is the committee chairman and Senator Gail Griffin (co-chairman) was the bills sponsor. Other committee members are Senators Don Shooter,  Andrea Dalessandro, and Barbara McGuire. The vote was unanimous.

To express support for the bill, Arizona residents can find contact information for their state senators and representatives at www.az.gov

An informative article was published in the April 2014 issue of Phoenix Magazine which describes what has happened to portions of the AMMM collection and possible future of the Polly Rosenbaum building which housed the AMMM until 2011.

A second article on the AMMM closure has recently been published in the Arizona Capitol Times (May 6, 2014). Click here to read the story.

On Saturday, April 30, 2011, the Arizona Historical Society fired the staff and closed the Arizona Mining & Mineral Museum. In addition, all the locks to the building were changed, and access to retrieve specimens and other artifacts on loan to the museum is now restricted by appointment only. This action is a clear and blatant violation of the following provisions of Arizona Statute 41-827:

The abrupt, unannounced closure breaks the plan of record promise by AHS director, Anne Woosley, that the museum shall remain open until June 1st, the end of the current school year. Subsequently, hundreds of students will be denied the opportunity to experience the musem and learn about the importance of mining and minerals in Arizona.
Click for a blog about efforts to repeal sections of House Bill 2251 and reassign the Arizona mineral collection to an appropriate, responsible entity…

The abrupt closure of the Arizona Mining and Mineral Museum in May 2011 prompted some of its former staff and volunteers to meet and discuss the possibility of establishing a new private museum. This group decided to expand the scope of the old museum to cover the natural wonders of the Earth and to form a nonprofit organization dedicated to providing unique and meaningful Earth science exhibits and educational programs for Arizona students and the general public.
As a result, the Earth Science Museum (ESM) was incorporated in the State of Arizona on July 1, 2011. An application for nonprofit status with the Internal Revenue Service followed in October 2011, and the new museum received a letter of determination on June 21, 2012.
While the Earth Science Museum has been busy securing its status as a nonprofit 501(c)(3) organization, it has also been actively involved in several outreach and fundraising activities. For the outreach program, the ESM developed new teacher kits with large rock, mineral and fossil samples; created hands-on activities for students; and trained presenters. The kits and class instruction were successfully tested at 17 local schools involving 1,584 students. Since these tests, the ESM has participated at a variety of science fairs and mineral shows and has distributed kits to thousands of students.
The current focus of the Earth Science Museum is to continue providing outreach educational support services and expand this program to include central Arizona. Specific short term goals include: acquiring a van, developing prototype rock and mineral display cases that will be deployed at school libraries, and adding personnel to increase the coverage of school districts. In addition, a major effort is planned to either build or lease an initial “brick and mortar” museum located in the Phoenix area. This “mini-museum” is designed to serve the general public and will feature several geology and mineral exhibits including the Flagg Mineral Collection.
The long term goal is to build and operate a world class museum dedicated to the Earth sciences. The museum expansion will be a distinctive Phoenix landmark offering a full range of facilities, immersive exhibits, and personalized visitor experiences.
Building a new museum represents a huge challenge, especially given the current period of economic uncertainty. The ESM however, understands the requirements and has created a set of mission-based, market-oriented, experience driven strategies to make the museum a thriving, “must see” destination for Earth science education.

To learn more about the Earth Science Museum, please visit EarthScienceMuseum.org or
Click here to visit the ESM website