The Flagg Mineral Foundation supports the Pinal Geology and Mineral Museum in Coolidge, AZ. The newest addition to the museum is a 72 drawer custom mineral cabinet made at the woodworking shop in the state prison in Florence. They did a wonderful job on the cabinet and a selection of the PGMS mineral collection has moved in! For more information on the museum, located in the Artisan Village at 351 N. Arizona Blvd in Coolidge, AZ, click here. Previous updates are also provided below. 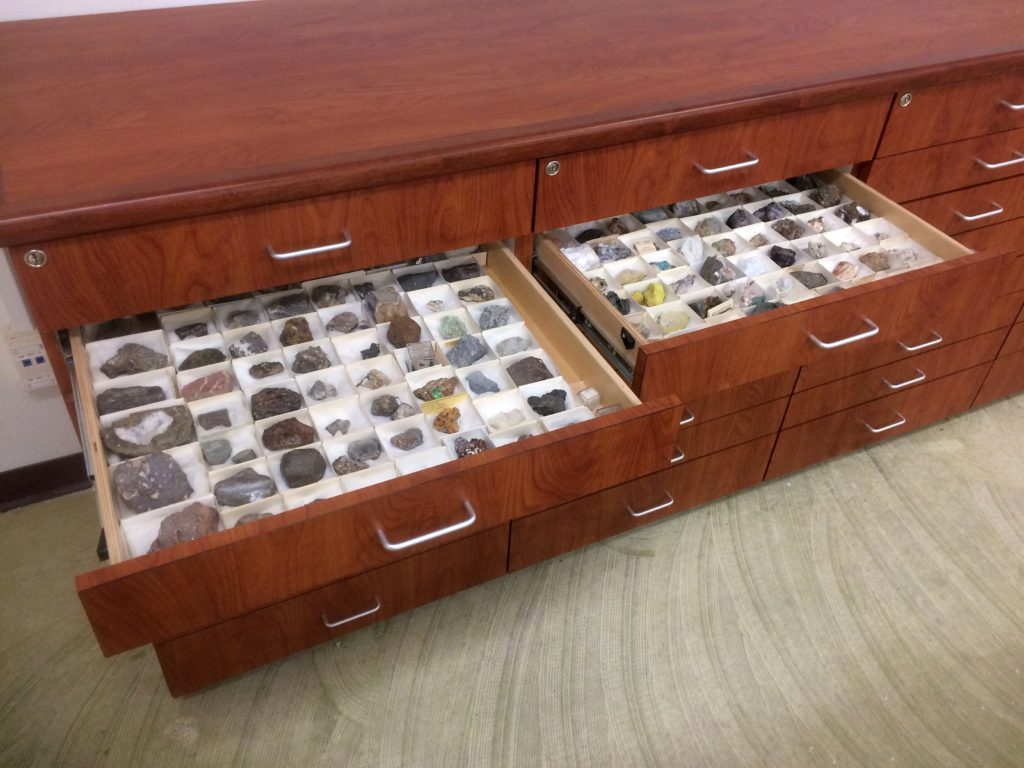 A more recent update (Oct17) to the Pinal Geology and Mineral Museum is the addition of new carpeting to the facility. The new carpeting was also supported by a donation from the Flagg Mineral Foundation! 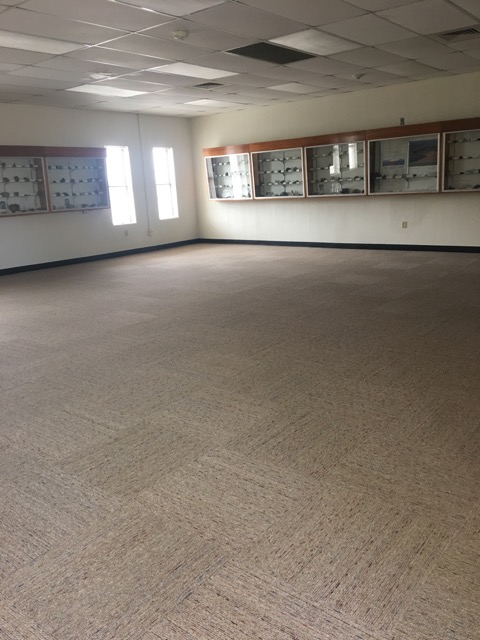 The FMF recently received a letter of appreciation from the Arizona Prospecting Association for providing booth space at the 2017 Flagg Gem & Mineral Show. The APA hosts the gold panning exhibit at the Flagg Gem and Mineral Show and estimated that 350 children tried their hand at gold panning at the 2017 show!  To see the letter, click here.

Phil Richardson was awarded the 2016 A.L. Flagg Distinguished Service Award for his work for the Flagg Mineral Foundation and the mineral collecting hobby. The award was presented by Bill Yedowitz at the Minerals of Arizona Symposium on April 16. 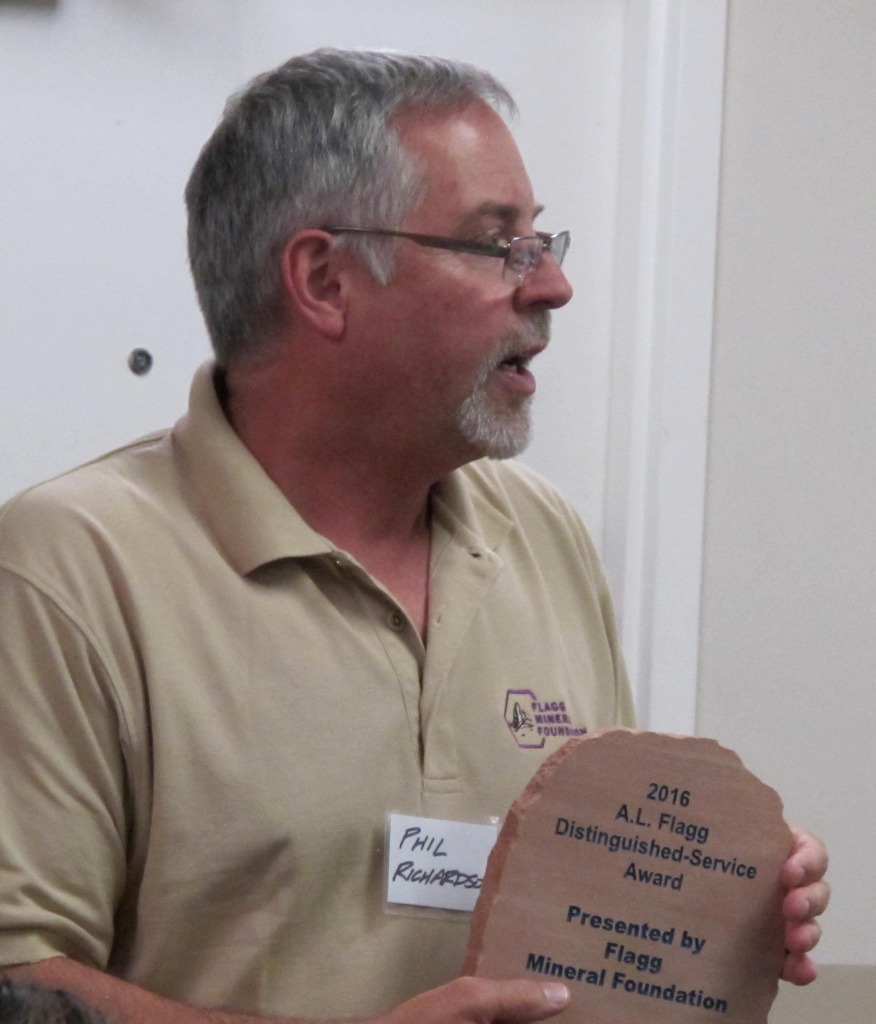 The Pinal Geology & Mineral Museum within the new Copper State Heritage Museum in Coolidge Arizona is now open! Details are available at the PGMS website. The Museum is located in the Artisan Village at 351 N. Arizona Blvd in Coolidge, AZ 85128 and the PGMS meets there monthly on the third Wednesday at 7pm.
The Flagg Mineral Foundation has loaned 24 specimens from the Flagg mineral collection to the new museum (photo below). In addition, the FMF has loaned a display of fluorescent minerals.
Make plans to stop by the new museum!! 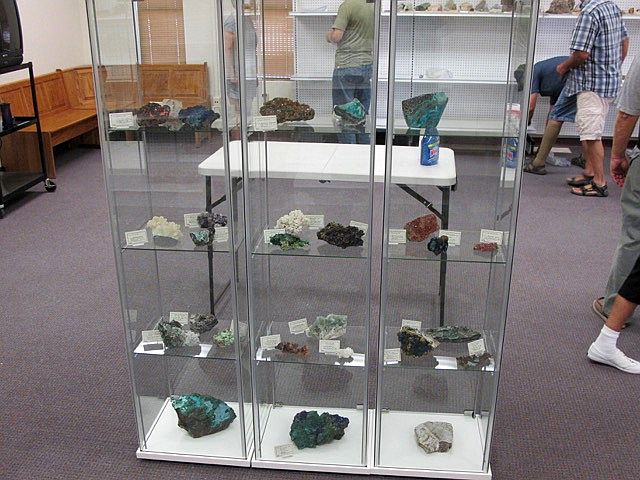 Nov15 Update: The FMF has donated a number of wall mounted mineral cases to the PGMS for the Pinal Geology & Mineral Museum and they have been installed! The FMF has also donated funds to update the light sources in the cases with new LED’s.


Feb16 Update: After a very successful fund raiser in December at the Artisan Village selling minerals and fossils and using remaining FMF donated funds, the PGMS was able to purchase a new dinosaur exhibit for the Pinal Geology and Mineral Museum! At the current time, we are unsure of the name of the new addition but stop by the museum to say welcome! 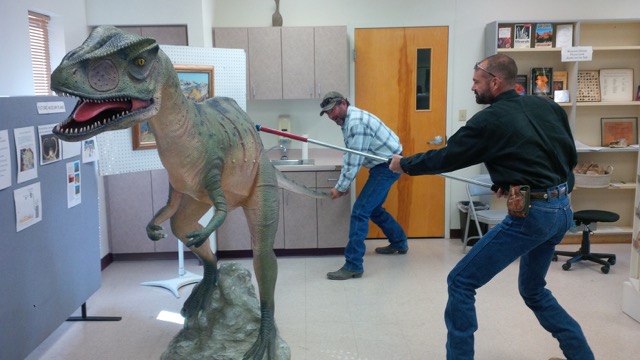 May16 Update: The FMF cases donated to the Pinal Gem and Mineral Museum in late 2015 have been filled with a variety of outstanding specimens! They are located primarily in the meeting/classroom area where visitors to the museum have easy access and can view the large collection of minerals on display. The museum is in Coolidge, AZ and location & hours of operation may be found at the website  – stop by for a visit if you are in the area.

January17 Update: The Pinal Geology and Mineral Museum is now a year and a half old and thanks to many volunteers who have helped us, we have come a long way. I want to give special recognition to the Flagg Mineral Foundation, they have loaned us the Arizona mineral collection and the fluorescent mineral display. They also donated the wall cases in the second room and donated funds to put new lights in the cases and to help buy our dinosaur. Their help has made the Museum what it is today. We have two major collections that have been donated – the Wicklund collection and the Weber collection. These are the main part of the exhibits in the Flagg cases. Now, we need to do some fundraising so we can add additional cases and exhibits.

Donations:
Steve Scott of Las Vegas, Nevada (He built the fluorescent mineral display in the Museum) donated some mammoth bones and a mammoth tooth. 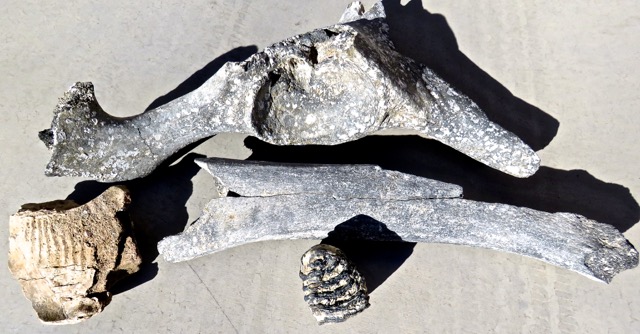 We also received an interesting Gastropod fossil in a conglomerate from John Rusinek of Phoenix. 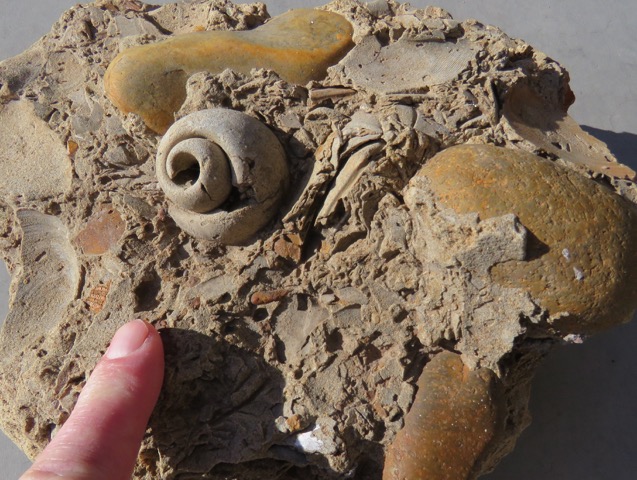 and a Gypsum, Pernatty Lagoon, Mount Gunson Mine, South Australia – a new specimen in our Australian mineral collection 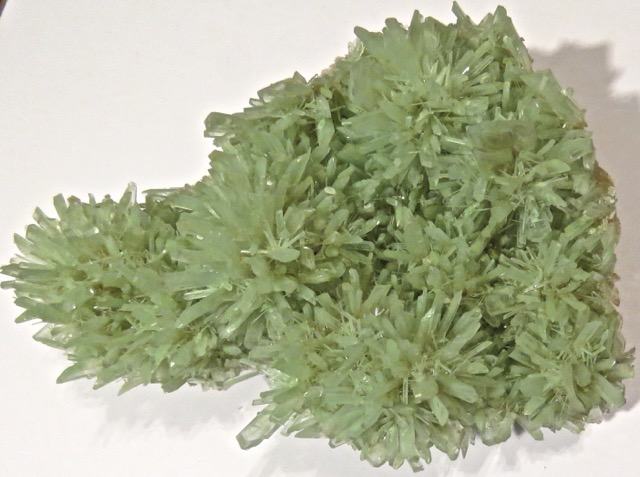 The Flagg Mineral Foundation has loaned the Peralta stones to the Superstition Mountain Museum (4087 N. Apache Trail, Apache Junction, AZ) where they are on display as a part of the The Jacob Waltz “Lost Dutchman” Exhibit. Stop by the museum to see them and learn about the history of the Peralta Stones. 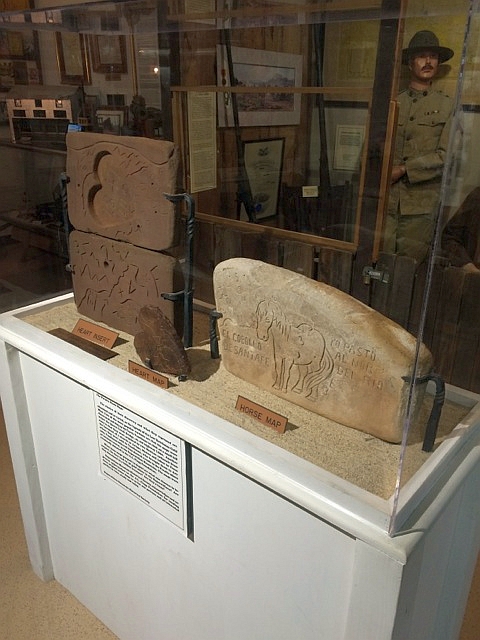 The FMF recently received a letter of appreciation from the Earth Science Museum and AZ Leaverites for providing booth space at the 2014 Flagg Gem & Mineral Show. The ESM & Leaverites maintained a variety of educational displays at the show including the egg carton collections and the fluorescent mineral exhibit and uses proceeds to fund educational outreach programs and developing a new mineral, geology and paleontology museum in the Phoenix area. To see the letter, click here.

The FMF recently received a thank you note from the MCC Geology Club for supporting them at the Flagg Gem & Mineral Show. The Geo Club’s booth at the FGMS had children lined up for the free fossil dig and also had a variety of pink halite and other specimens for sale. The club donated proceeds from their booth to the Donna Benson Excellence in Science Education Scholarship! To see the note, click here.

Please read the recent letter the FMF received from the Cave Creek Museum. They are in Cave Creek, AZ and have a 5-stamp mill! They are open Oct-May. Additional information may be found at the museum website.

Collectors Les Presmyk, Tony Potucek & Richard Graeme in association with publisher Gloria Staebler (Lithographie, LLC) are working on a new book that is currently available. This volume covers Arizona minerals from the perspective of collectors and present stories of collecting specimens by periods of time.
Click to read more about the book

Mines, Ghost Towns and Legends of the American West

Ivan Herring has published thirteen new books relating to Arizona minerals and mines which are available in the Amazon Kindle e-book system. These interesting books are part of the “Mines, Ghost Towns and Legends of the American West” series. All are available for free review on Ivan’s Amazon author page or simply by going to the Amazon Kindle Store website and entering the titles in the search box.
Current Arizona books cover Santa Cruz, Greenlee, Graham, Cochise, Gila, La Paz, Yuma, Pima, Pinal, Maricopa, Mohave and Coconino counties with a new book on Apache county expected soon. Ivan also has written books in the same series for mines and mineralization in California, Nevada and Utah and has number of “Lost Mine and Treasure Tales“as well. Some of these are currently available for free rental through the Amazon Prime/Amazon Unlimited program.