The 40th Annual Flagg Gem and Mineral Show was held Friday, January 6, 2012 to Sunday, January 8, 2012 from 9 am to 5 pm. The show was located at Mesa Community College in the West parking lot which is on Dobson Road between Southern Avenue and the Superstition Freeway (Route 60). A number of exhibits were set up including the Peralta Stone maps and a special fluorescent display. Parking and admission were free to the public, and there were free activities for children along with free samples for children and teachers. 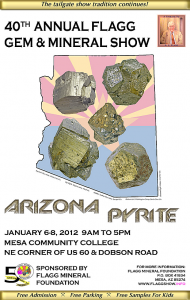