The 42nd Annual Flagg Gem and Mineral Show was held Friday, January 3, 2014 to Sunday, January 5, 2014 at Mesa Community College. A number of exhibits were set up including the Peralta Stone maps and a special fluorescent display by the ESM. 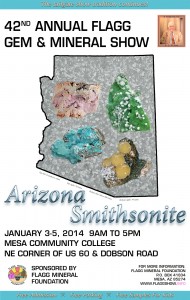 Photos from the 2014 Show
Photos courtesy of Genie Howell